Directives are placed in a pipeline, and executed in order. Their initial design is simple, like this:

This architecture, though, doesn't make the most out of GraphQL. Below is the description of all the stages from the actual directive pipeline, until reaching the actual design implemented in GraphQL by PoP.

# Directives as building-blocks of the query resolution

Initially we could consider having the GraphQL server resolve the field through some mechanism, and then pass this value as input to the directive pipeline.

For this reason, the GraphQL by PoP server is provided with two special directives:

These two are of the special type "system" directives: they are reserved to the GraphQL engine only, and they are implicit on every field. (In contrast, standard directives are explicit: they are added to the query by the user.)

By using these two directives, this query:

...will be resolved as this one:

The pipeline now looks like this (please notice that the pipeline receives the field as input, and not its initial resolved value):

The pipeline will then offer five different slots through class PipelinePositions, and the directive will indicate in which one it must be executed:

The directive pipeline now looks like this (considering just 3 stages, to simplify):

Please notice how directives @skip and @include can be so easily satisfied given this architecture: placed in the "middle" slot, they can inform directive @resolveValueAndMerge (along with all directives in later stages in the pipeline) to not execute by setting flag skipExecution to true.

# Executing the directive on multiple fields in a single call

Until now, we have considered a single field being input to the directive pipeline. However, in a typical GraphQL query, we will receive several fields on which to execute directives.

For instance, in the query below, directive @upperCase is executed on fields "field1" and "field2":

Moreover, since the GraphQL engine adds system directives @validate and @resolveValueAndMerge to every field in the query, so that this query:

...is resolved as this query:

Then, the system directives will always receive all the fields as inputs.

As a consequence, the directive pipeline is architected to receive multiple fields as input, and not just one at a time:

This architecture is more efficient, because executing a directive only once for all fields is faster than executing it once per field, and it will produce the same results.

For instance, when validating if the user is logged-in to grant access to the schema, the operation can be executed only once. Running the following code:

is more efficient than running this code:

This may not seem to be a big deal when calling a local function such as isUserLoggedIn, however it can make a big difference when interacting with external services, such as when resolving REST endpoints through GraphQL. In these cases, executing a function once instead of multiple times could make the difference between being able to provide a certain functionality or not.

Let's see an example. When interacting with Google Translate through a @translate directive, the GraphQL API must establish a connection over the network. Then, executing this code will be as fast as it can ever be:

In contrast, executing the function separately, multiple times, will produce a higher latency that will result in a higher response time, degrading the performance of the API. Possibly this is not a big difference for translating 3 strings (where the field is the string to be translated), but for 100 or more strings it will certainly have an impact:

Additionally, executing a function once with all inputs may produce a better response than executing the function on each field independently. Using Google Translate again as example, the translation will be more precise the more data we provide to the service.

For instance, when execute the code below:

For the first independent execution, Google doesn't know the context for "fork", so it may well reply with fork as a utensil for eating, as a road branching out, or as another meaning. However, if we execute instead:

From this broader amount of information, Google can deduce that "fork" refers to the branching of the road, and return a precise translation.

It is for these reasons that the directives in the pipeline receive the input fields all together, and then each directive can decide the best way to run its logic on these inputs (a single execution per input, a single execution comprising all inputs, or anything in between).

# Executing a single directive pipeline for the whole query

Just now we learnt that it makes sense to execute multiple fields per directive, however this works well as long as all fields have the same directives applied on them. When the directives are different, it can lead to a greater complexity that makes its implementation difficult, and would reduce some of the gained benefits.

Let's see how this happens. Consider the following query:

This directive is equivalent to this one:

In this scenario, fields field2 and field3 have the same set of directives, and field1 has a different one, then we would have to generate 2 different pipelines to resolve the query:

And when all fields have a unique set of directives, the effect is more pronounced. Consider this query:

Which is equivalent to this:

In this situation, we will have 3 pipelines to handle 3 fields, like this: 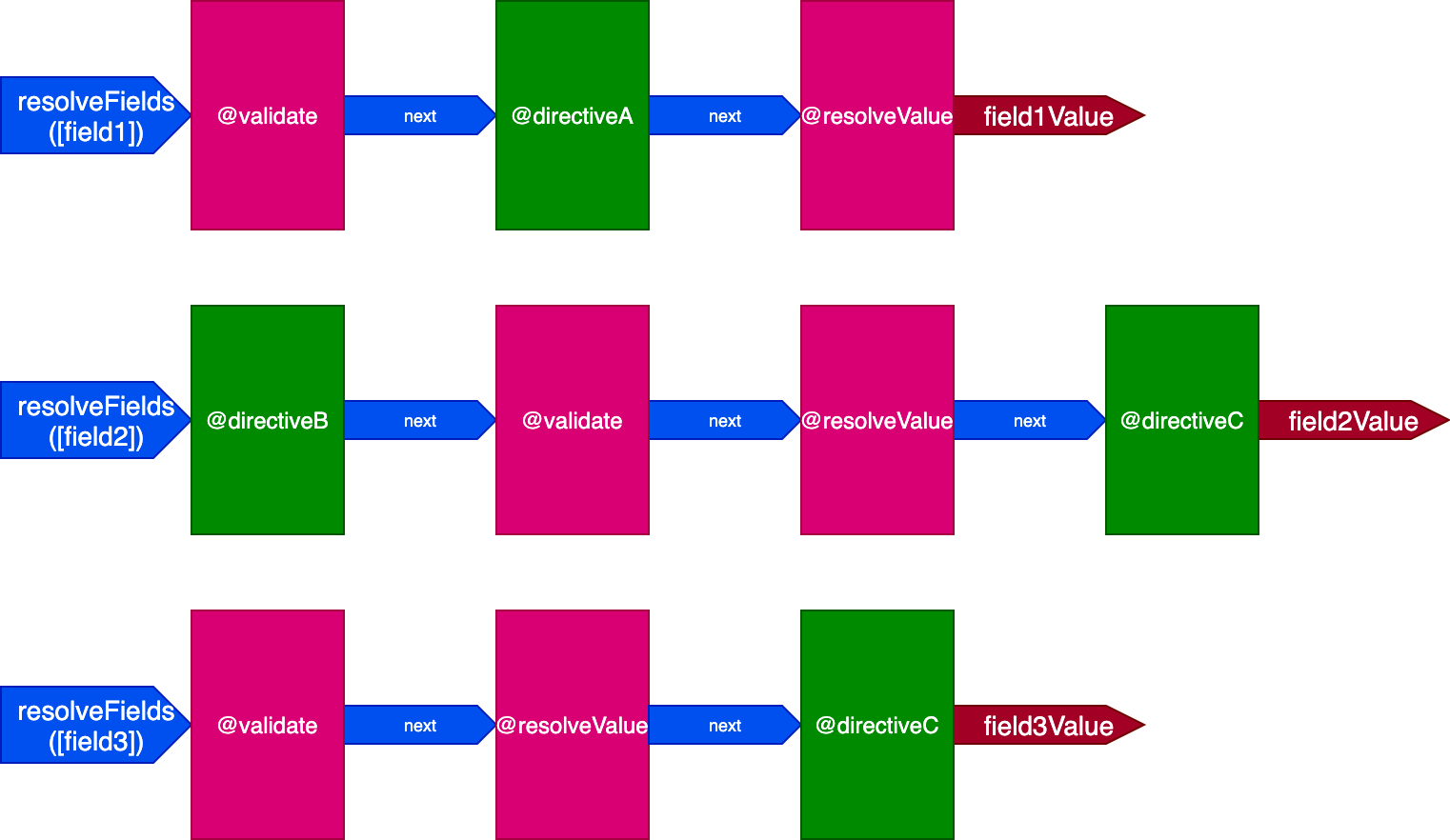 In this case, even though directives @validate and @resolveValueAndMerge are applied on the 3 fields, because they are executed through 3 different directive pipelines, then they will be executed independently of each other, which takes us back to having a directive being executed on a single item at a time.

The solution to this problem is to avoid producing multiple pipelines, but deal with a single pipeline for all the fields. As a consequence, the engine doens't pass the fields as input to the pipeline any longer, since not all directives from a single pipeline will interact with the same set of fields; instead, every directive must receive its own list of fields, as its own input.

Then, for this query:

...directives @validate and @resolveValueAndMerge will get all 3 fields as inputs, and directiveA will only get "field1":

And for this query:

Until now, a directive at some stage could influence the execution of directives at later stages through some flag skipExecution. However, this flag is not granular enough for all cases.

For instance, consider a @cache directive, which is placed in the "end" slot to store the field value, so that next time the field is queried, its value can be retrieved from the cache through a directive @getCache placed in the "middle" slot:

When executing this query:

The server will retrieve and cache 2 records. Then, we execute the same query, but applied to 4 records:

So we update the design of the pipeline again. We dump the skipExecution flag, and instead pass to each directive the list of object IDs per field where the directive must be applied, through a fieldIDs object input:

Variable fieldIDs is unique to each directive, and every directive can modify the instance of fieldIDs for all directives at later stages. Then, skipExecution can be done granularly at an ID by ID basis, by simply removing the ID from fieldIDs for all upcoming directives in the stack.

Applied to the previous example, when executing the first query translating 2 records, the pipeline looks like this:

When executing the second query translating 4 records, directive @getCache gets the IDs for all 4 records, but both @resolveValueAndMerge and @cache will only receive the IDs for the last 2 records only (which are not cached):

# Tying it all together

This is the final design of the directive pipeline:

Summarizing, these are its characteristics: